Being a local artist in the community and having four children, I was of course asked to help come up with ideas for the auction at the Gala which raises funds for our school. It was fun to think of ideas that many children could work on bit by bit and produce something that someone would want to bid on. It was delightful and chaotic to work with the kids. All 4 canvases are 24″x30″. They were created with mixed media, and among the collage you can find: homework, math problems, rough draft essays, sheet music from band and choir. 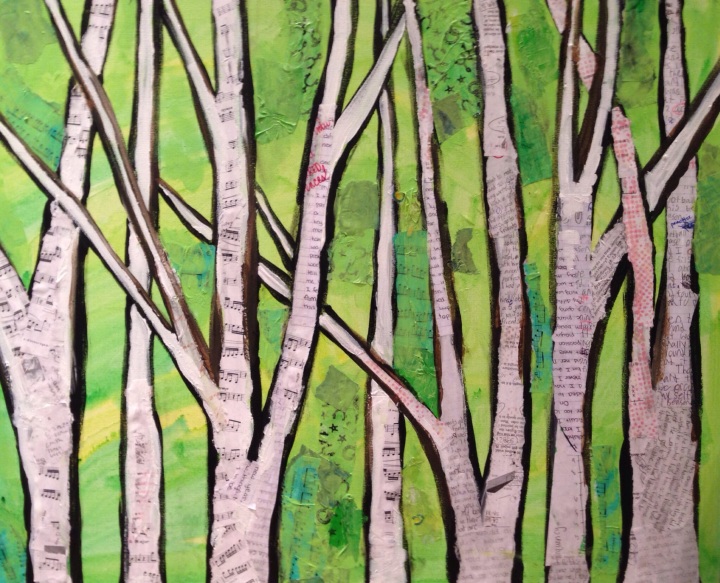 While riding my bike on spring break, I looked down and noticed a beautiful little plant with tiny leaves. “That looks like thyme” I said to my husband. “How do you know?” He asked. “I’ve always had thyme in my garden. Will you hand me a little? I want to taste it and make sure.” Tasted just like thyme. “Look we are surrounded by it, it is all over the trail” I exclaimed. “Could you use it”. My husband asked. “Yes thyme would make our fresh seafood dinner taste lovely.” I responded. We rode along in silence for a few minutes, and my husband wisely said “you should replay our whole conversation in your head, but replace the word thyme, with the word time.”

The next day we found all the thyme on the trail in bloom. The thyme became a metaphor for my family vacation, I wanted to notice it, use it, enjoy it, add a little extra to everything. I wanted our time together to bloom.

I painted this in the car traveling home, using the last bit of time left from our vacation.

If you’re from the South you know of a plant called “Spanish Moss”. It’s neither spanish or moss! However
There are some legends associated with it.
For those speakers and storytellers coming to the south telling one of these stories will make you a hit!

A Spanish soldier fell in love at first sight with an Indian chief’s favorite daughter. Though the
chieftain forbade the couple to see each other, the Spaniard was too lovestruck to stop meeting the
maiden in secret. The father found them out and ordered his braves to tie the Spaniard high up in
the top of an ancient oak tree.

The Spaniard had only to disavow his love to be freed, but he steadfastly refused. Guards were
posted to keep anyone — the chief’s daughter above all –from giving food or water to the
poor Spaniard. The Spaniard grew weaker and weaker, but he still would not renounce his
love for the girl.

Near the end, the Chief tried to persuade him once more to stay away from his daughter. The Spaniard
answered that not only would he refuse to disavow his love, but that his love would continue to grow
even after death. When at last the Spaniard died the chief kept the body tied up in the tree as a
warning to any other would-be suitors.

Before long, the Indians began to notice that the Spaniard’s beard continued to grow. The Indian
maiden refused ever to take a husband — unless the Spaniard’s beard died and vanished from the
tree. As the years went by, the beard only grew stronger and longer, covering trees far from the
Indian maiden’s village. Legend says that when the Spanish Moss is gone, the Spaniard’s love will
have finally died with it.

There’s an old, old legend, that’s whispered by Southern folks, About the lacey Spanish Moss that garlands the great oaks. A lovely princess and her love, upon their wedding day, Were struck down by a savage foe amidst a
bitter fray;
United in death they were buried, so the legend go “Neath an oak’s strong, friendly arms, protected from their foe;
There, as was the custom, they cut the bride’s long hair with love And hung its shining blackness on the spreading
oak above; Untouched, undisturbed it hung there, for all the world to see. And with the years the locks turned grey and spread from tree to tree.

I set up my easel to paint, and as the shadows lengthened, my kids gathered with their new friends in front of me and played a game of ball. Lydia played with her brothers GI joes at my feet, she brought out their more wholesome sides.

I thought of how inspired I was by Sorolla’s figures on the beach, but decided to nap instead of put in the ball players into my painting. It is vacation after all.

When we arrived the water was beautiful greens and blues, and glassy. Then the weather turned much colder, windier, and the crystal sea, turbid. Knowing that the beach can be cold this time of year we were armed with fleeces and sock hats. My parents gave everyone short wet suits for Christmas, so when the weather turned, we were ready. I watched my kids charge into the icy water and play delightedly for half an hour. They asked me to join them. I found my wetsuit in my art bag, and squeezed into it with considerably more effort than it took my 9 year old. I am almost embarrassed to admit that the wetsuit did not turn the water bathtub warm. Like my 0 degree north face backpacking sleeping bag, rather than conveying actual comfort it merely increases your chances of survival.

Here is a simple recipe to fully enjoy this week’s art. Go out the yard and scrounge up a little sand. Now go back in and stir 1/4 tsp. into your mayonnaise jar, sprinkle 1 Tbsp into your underwear drawer, now dump whatever is left in your bed. Great! Now you can enjoy this week’s art, just like you are here with me.

I painted this with an artist friend who inspires and encourages me, we spent a delightful day working on painting clouds.

Renowned poet and philosopher Henry David Thoreau once said, “A lake is the landscape’s most beautiful and expressive feature. It is earth’s eye; looking into which the beholder measures the depth of his own nature.” 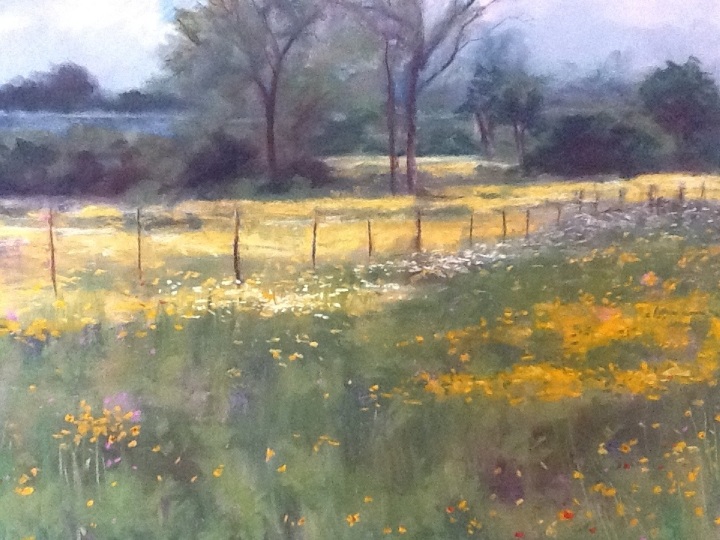 This is a field of yellow flowers. I didn’t note which species on my photo, but I know enough about yellow composites to know each flower is not that remarkable on its own. It probably had a woody stem, perhaps even slightly prickly, and they usually have a fragrance that is…well, stinky. As I painted, I thought of the thousands and thousands of acts we go through as mothers – the small things that alone don’t amount to much, honestly, they too might be just a wee bit stinky. However, if you can get a bit of perspective, by climbing a tree, standing on your car, or perhaps a stack of calendars and yearbooks the big picture can take your breath away.

From My Rotting Body, Flowers Shall Grow, and I Am in Them, and That Is Eternity
—Edvard Munch