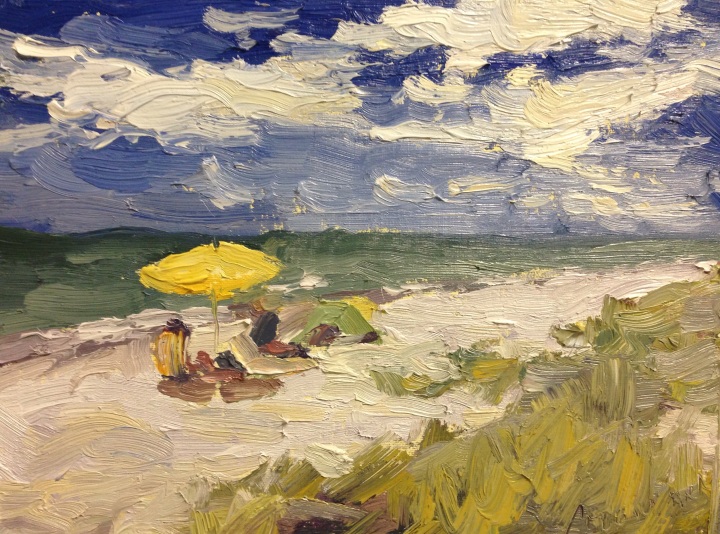 It is interesting how memories work? You won’t think of something for a long time, and then something will trigger a flood, as if unlocking a secret closet you forgot about. This little, green, sand tent was such a key for me.

My oldest son had a little sand tent as a very young child, his was red and blue. We did not limit its use to the beach and sunny days, we used it at friends houses and hotel rooms, anywhere we wanted to create a little cocoon of familiarity for him. As I painted this little tent I watched its occupant climb in and out, and I started to laugh. My kids came and sat by the easel wanting to see what was so funny. Puzzled they asked me why I was laughing. The tent I was seeing was red and blue…

I remembered one time we were at my parents house. Noah was a toddler, and he was tucked into his tent ready to sleep. I heard him crying and hollering “MOM!”. I checked on him and found everything with him to be in order, so I re-kissed his head and left. Minutes later the outbursts from the tent started up again. This time I found out what was invoking his cries. My parents big, orange cat had made a game of climbing on various pieces of furniture and launching himself at the tent, the tent would bend a bit and then the cat would fly off in various directions. The cat seemed to enjoy being catapulted off the tent. Noah, inside, was literally under attack, from his perspective there was a huge hairy monster clawing and dropping from the sky. I laughed that day too.

One of the things I have most enjoyed from sharing my paintings with the world, is hearing the stories they invoke. If that happens to you, I hope that after you dust off the cobwebs (or beach sand) you will share them with me.

Please let me know what you think Cancel reply